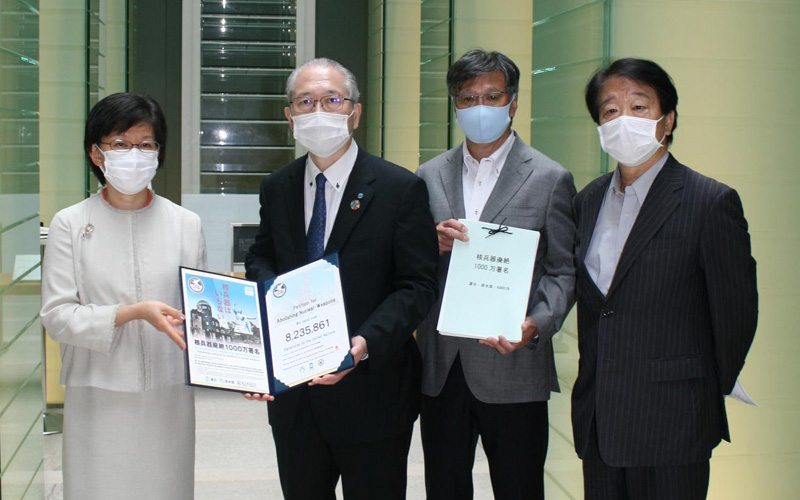 On August 9, the JTUC-RENGO, together with the Japan Congress Against A- and H-bombs (GENSUIKIN) and the National Council for Peace and Against Nuclear Weapons (KAKKIN), submitted the signatures collected under the “10 Million Signatures for the Abolition of Nuclear Weapons Campaign” to the United Nations at the Nagasaki National Peace Memorial Hall for the Atomic Bomb Victims in Nagasaki.

The 10 Million Signatures Campaign has been promoted by RENGO, GENSUIKIN and KAKKIN, in solidarity with the ITUC, for the Review Conference of the Parties to the Treaty on the Non-Proliferation of Nuclear Weapons (NPT) which is held every five years. The collected signatures were to be submitted at the United Nations Headquarters in New York to coincide with the Review Conference which was originally scheduled for April 2020. However, in light of the COVID-19 pandemic, the conference has been postponed, and therefore the signatures were handed to the United Nations representative who attended the Nagasaki Peace Memorial Ceremony.

The collected signatures demand for the following three points towards the abolition of nuclear weapons:

Representing the three organisations, Mr. Rikio Kozu, President of RENGO, Mr. Yasunari Fujimoto, Vice-Chairperson of GENSUIKIN, and Mr. Hirotaka Watanabe, Acting Chairperson of KAKKIN handed over the signatures. On behalf of the three organisations, Mr. Kozu said, “More than 8.2 million signatures have been collected, which is one million more than the previous signatures we had submitted. These signatures call for the Japanese government to ratify the Treaty on the Prohibition of Nuclear Weapons as one of its the demands. We would like the United Nations to take these signatures to heart and to promote the abolition of nuclear weapons.” He then submitted a certificate of 8,235,861 signatures (as of May 31, 2020).

In response, Ms. Izumi Nakamitsu, U.N. Under-Secretary-General and High Representative for Disarmament Affairs, said, “I am grateful to the three organisations, including RENGO, for their continued efforts to promote the abolition of nuclear weapons. On this occasion of the 75th anniversary of the atomic bombings, we need to reverse the wave of military expansion. Ratification of the Treaty on the Prohibition of Nuclear Weapons depends on a decision of a sovereign state, but it is important for the Japanese government to send a message that it identifies with the content of the treaty. When the treaty comes into force, it will be good for Japan to follow up on the discussions then. I hope that Japan does not close the door on the path towards the abolition of nuclear weapons.”

The signatures will also be submitted to the Japanese government in conjunction with the postponed NPT Review Conference. 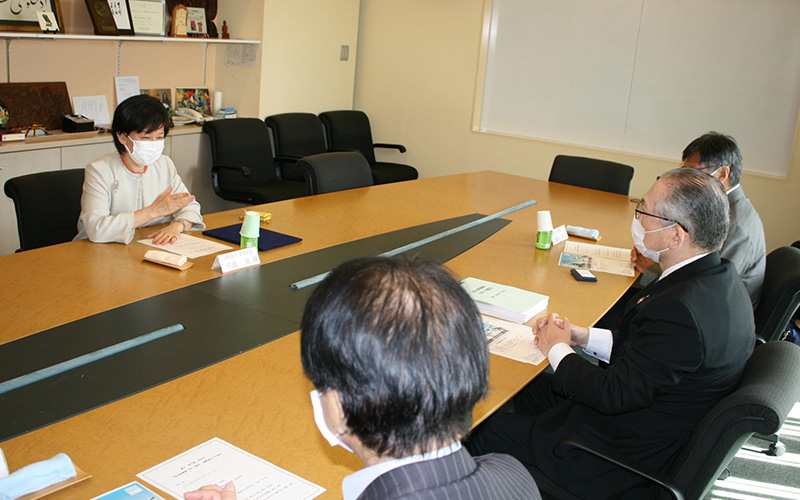 Meeting of representatives from the United Nations, RENGO, GENSUIKIN, and KAKKIN